My Heart and my Home

I sit here today, looking at the data from around the world, and see that we are on the verge of stabilizing this outbreak almost everywhere. There are still some hotspots, and some really big unknowns (like India and South America), but most countries seem to have socially engineered a reprieve from this pandemic. We will solve this problem, but we still have some hard yards in front of us. My focus today, is with my heart (Australia) and my home (USA).

You have this within your grasp. Your peak in new infections was the end of March. Since that time, you have managed to drop infection numbers by 86% while still testing people at record pace. Your daily increase in new cases is below 1%. You have dropped the reproductive rate of this pathogen from 3 to below 1. We have now seen almost a week of fewer than 50 new cases per day. This is because you acted early, acted hard, and acted as a team. 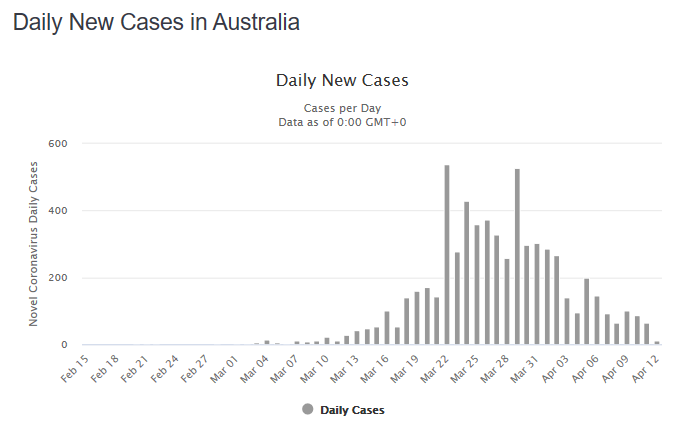 Your peak mortality was April 5-7th, roughly a week after peak infections, which is exactly what would be predicted by the disease progress. You still have 79 people in ICU, so there is going to be about 40 more deaths nationally. Tragic, but still an outcome that few other countries will replicate.

The contact tracing in Australia has been remarkable; 90% of all cases have been traced to an index case, leaving on 10% of unknown origin. This is a remarkable feat of your public health system and the people performing this invaluable service.

So what comes next? I imagine the Government is going to keep their boot down for a little while longer. You maybe have a week or two of only your garbage bins being allowed outside (https://www.facebook.com/groups/306002627033697/). I would then expect a staged opening of businesses. Life will have to look different for a while; all enclosed spaces will have limits on the number of people in them to maintain physcial distance; workplaces and shops. If you own a business, work out how you can engineer your workplace to increase physical distance between employees and customers. This can be through rearranging workspaces, have a portion of your workforce telecommuting, running your workplace in shifts to lower staff on the floor at any one time, and limiting customer number in your business. I also expect that restaurants and pubs will need to reconfigure tables and occupancy limits. But I expect having a beer at the pub is not too far away. Large gatherings may still be restricted, so concerts and footy games may still be cancelled.

I expect they are going to ask something from each of you as well. Check your temperature daily, stay home if you're sick, and maintain good hand and face hygiene.

The key metric to look out for over the next weeks and months is deaths. They are measurable. If deaths due to coronavirus increase, even if cases of infected in the community don’t increase, then you are missing community transmission with your testing and restrictions will come back. If deaths stay low, your testing and contract tracing is working and you have this controlled.

Finally, there is no way Australia is going to allow foreign travel this year (in or out). You’ve worked hard to control this virus and your population is still susceptible. You can’t let it back in. Even the Australian Minister for Tourism said something similar this weekend. Your vacations are going to be in Australia for the foreseeable future. That sounds pretty OK to me!

In contrast, let’s look at the situation in the USA and Massachusetts.

While we started off slow, we are just beginning to turn the corner nationally. We are seeing some stabilization, which I will discuss.

We can’t rely on the testing. We are not testing enough to get a reasonable idea of whether cases are increasing or not on a national level. Our testing reveals that 1 in 5 people tested are infected (20%), compared to Australia's 2% infection rate and Australia testing 3x more people per capita. The percentage of people testing +ve in the USA is so high because we are only testing people who are sick and meet the CDC testing criteria, or people who are being hospitalized. So we are missing the spread in our communities until it hits a sentinel population.

What we can use as a metric is hospitalization and deaths. Hospitalizations are slowing down. They increased up to the ~7th of April, but now mid-month, they appear to be plateauing. Currently, there are at least 51,000 people in hospital, with 12,000 of those considered serious or critical. There are many more, as some states like Louisiana and Washington State are not reporting hospitalization numbers. But the number of people being admitted to hospitals for care appears to be stable. This is great news, as it does not appear that we are going to overwhelm our hospital capacity in most cities. Social distancing worked exactly as it was planned.

Given how high we rose in daily cases and in daily deaths, the back side of this peak is going to be long. We can only really use the data from Italy and Spain to estimate the decline (as their peak came earlier), but it appears that once you have turned the corner from a major epidemic, deaths drop ~25% every 2 weeks. So from the current cases, with our nation mostly on lockdown, we are looking at mid to late June before the number of dead drop to below a few hundred per day. Hopefully, a treatment comes soon to improve this.

The current nationwide reproduction rate is estimated to be 1.2, down from 3. So our efforts to slow the virus’s spread have worked, but as the number is still above 1, the numbers of people being infected with the virus is still increasing. There are obviously differences state-by-state. States such as Vermont, Idaho, Oklahoma, Nevada are likely flat or marginally decreasing. The stand out is Washington State, with good testing and public support, it appears to have dropped the reproductive number of this virus below 1.

On the other side, some states are still getting hit hard. In general, the middle of America is starting to get hit. They can control it, as numbers are still low, but they need to make some changes soon. Most of the rest of the country have an R0 of 1.1 to 1.6. Not where we want to be….. Most new cases this week will be from Illinois, Massachusetts, Michigan, New Jersey, New York, and Pennsylvania.

Looking at Massachusetts and Rhode Island, we have dropped our R naught to 1.2 and 1.5 respectively. I think Rhode Island’s higher number is more a reflection of increased testing than increased community spread. But it is clear the virus is still expanding in both states. So even though we have pretty rigorous social distancing measures in place and have had them in place for nearly a month, the virus is still finding available bodies.

RANT. This weekend, just in my neighborhood, I saw a Saturday night in-home party with cars of guests and a Sunday lunch gathering at 2 different homes. This is how the virus moves. You move, it moves with you. It is those decisions, especially the in-house enclosed environment friends-over visiting ,that is going to keep us longer in our homes or kill more people. RANT over

In Massachusetts, we have flattened the curve. Peak resource utilization (Hospital beads) was meant to be today, that date has now been pushed back to the end of the April. The peak is also not as high. That is great news; we have spread the serious and critical cases out over a longer period, which has kept beds available for anyone who needs them.

The downside is that our current social distancing measures in Massachusetts are NOT STRONG ENOUGH to reduce infections below R0=1.

The virus is still spreading…. And yes, your Easter lunch/party will only make this worse. We will see that in the data in 2 weeks (sorry, apparently my rant was not over). So with peak infections soon and peak mortality approximately 2 weeks away (April 29th), I do not see a path forward for reopening our schools or reopening businesses on May 4th in Massachusetts. 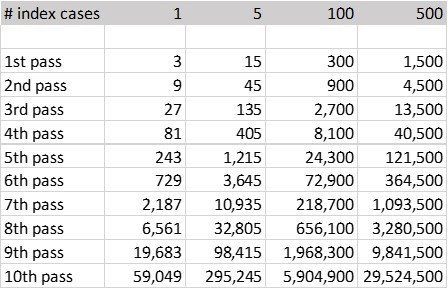 It would make no sense from a public health perspective, if we opened at or near our infection peak. We literally would see an explosion in case numbers that would occur faster and be of a greater magnitude than the first wave in March. To illustrate, from a single index case in the State, without any measures inplace, approximately ~200 people will contract the virus in a month, and 59,000 will be infected over ~2 months. But, if you start with 500 index cases in your State, within a month you have 121,000 people infected and by the end of 2 months you have 29 million.

Reopening is just a bad public health idea until you have systems in place to limit the spread: Testing, isolation, contact tracing, and quarantine. Or a viable treatment. If we lift restrictions, the virus will return.

We are going to see mounting economic pressure to reopen soon. I believe the political pressure to reopen the economy will outweigh public health data that indicates it’s a bad idea. Hey economists: rather than micromanaging the Doctors and Epidemiologists, how about you work out the supply chain issues? Or the Manufacturing issues that are delaying our responses.

But to be clear, no matter what we do, it will have an enormous cost. We just need to choose where those costs will be.

If we want to get back to anything like we had two months ago, we need to Test, Isolate, Trace.

"There is no cheap or easy way out of this pandemic. It’s going to be hard, cost huge amounts of money, and require huge effort. Or we will kill the people and the economy. The sooner we accept our path – our Apollo mission, the sooner we progress" (Drs Bradford and Hodcroft)

Erin S. Bromage, Ph.D., is an Associate Professor of Biology at the University of Massachusetts Dartmouth. Dr. Bromage graduated from the School of Veterinary and Biomedical Sciences James Cook University, Australia where his research focused on the epidemiology of, and immunity to, infectious disease in animals. His Post-Doctoral training was at the College of William and Mary, Virginia Institute of Marine Science in the Comparative Immunology Laboratory of late Dr. Stephen Kaattari.

Dr. Bromage’s research focuses on the evolution of the immune system, the immunological mechanisms responsible for protection from infectious disease, and the design and use of vaccines to control infectious disease in animals. He also focuses on designing diagnostic tools to detect biological and chemical threats in the environment in real-time.

Dr. Bromage joined the Faculty of the University of Massachusetts Dartmouth in 2007 where he teaches courses in Immunology and Infectious disease, including a course this semester on the Ecology of Infectious Disease which focused on the emerging SARS-CoV2 outbreak in China.

I apologize for my conspicuous absence over the last few weeks. I am now almost finally through the emails, and will be able to return to writing new posts. I am finalizing my latest post on what the

What's the deal with Masks?

How to Have a Safer Pandemic Memorial Day